The magazine Il Timone, a Catholic monthly magazine that looks at reality with faith and reason since 1999, brought together around a table Cardinal Gerhard Muller, a former prefect of the Doctrine of the Faith, Professor Marcello Pera, former president of the Italian Senate, and the deputy director of the newspaper ‘La Verità’ Martino Cervo. Philosophy, Politics and the Church debating on the crisis of liberal democracies in the Western countries

The election of Donald Trump as president of the United States, Brexit and the rise of the so-called populisms in Europe (a vague and convenient definition especially for detractors) have shown a worm that has now dug deep, the liberal model that after the fall of the Berlin Wall seemed the definitive landing of the democratic world is now being questioned.

The point is that there is an idea of freedom disconnected from a prepolitical reality and the consequence is the creation of a series of subjective rights in continuous and imaginative expansion. The result? The inability to balance individual freedoms with social order and stability. What are our fundamental freedoms? Why do we have them? What or who guarantees these rights? Here is an excerpt from the Timone dossier.

Eminence, is liberalism in crisis?

Gerhard Müller: In a world dominated by global communication it seems to me also difficult to understand what is inside or outside the liberal model or what, instead, represents already a form of “open” totalitarianism, “democratic” and “global”. We have this vision of still living within a liberal democracy, but we are facing a false ideology that is no longer even liberal. Liberality comes from God, as St. Thomas said: Deus maxime liberalis est. This is the source of freedom that gives man his fullest dignity, but today we have a substitution of Christian culture, of Christian principles and values, with ideologies that have nothing to do with transcendence. We can give an example of the so-called genderism, or of a certain environmentalism, substitutes for religion where problems are solved pragmatically, but in the absence of a transcendent vision. We are faced with the destruction of the foundations of Christian culture that exists together with the Greek Roman culture in an amalgam that with the Old Testament represents a continuum of 4.000 years. Today, starting from the European institutions and some parliaments of European states, we are witnessing a persistent attempt to move away from these cultural roots and to completely dechristianize peoples life, with a new fury with a Jacobin flavor that aims to eliminate any reference to a transcendent dimension. So, however, man can be exploited without any limit, this is the great challenge of today. (…)

Professor Pera in 2008 you wrote a book, ‘Why we have to define us as Christians’, which already denounced the crisis of the liberal model, indicating precisely the need to refer to Christianity the way out of it. At what point is the night?

Marcello Pera: It’s still long… You’ve talked about external and internal enemies of the liberal model, first of all I would like to point out that for some decades now externally we have one more element that puts pressure and it is Islamism. But external enemies, despite being dangerous, have a great advantage because knowing them allows us to face them. But we must certainly agree that the most insidious enemies are those internal to Western liberalism, intrinsic to that which Popper called ‘open society’. Such a society can certainly fall through internal collapse, due to a spiritual and moral implosion. This I fear is happening today because liberalism has changed doctrine. (…) We must insist on another type of freedom, that for which there are principles to which no will that wants to consider itself free can escape. From my point of view, Kant’s formula is still valid, although I know that the cardinal will not be perfectly in agreement, but in some way it could also be good for a Christian: when is the will of an individual free? The will is free, teaches Kant, when the will is good and this is such when it is subjected to the moral law. Modern liberalism has completely lost this sense of freedom. We can say this is the religious foundation of freedom: there is a moral law, for Christians this law is revealed by God, and you are truly free if you respect that moral law. Not when you eliminate some external obstacles. Modern liberalism, unlike the classical one, has completely forgotten the religious foundation of freedom. Having forgotten this concept of freedom, therefore, liberalism has also forgotten the concept of natural law. Today, according to this liberalism, natural rights are in fact simply good wishes or bad desires fulfilled by law. (…)

In the recently published “notes” by Benedict XVI there is a precise reference to God the creator as the cornerstone of good coexistence. And Joseph Ratzinger himself, even as a cardinal, has often spoken of the important rational recognition of the existence of God. Today, however, this seems to be a forgotten topic even in the Church.

Gerhard Müller: Unfortunately it is so, today for most of the people the faith is only an emotional and sentimental act and it is no longer necessary to find arguments for the existence of God. But in Christianity, as Saint Paul teaches, faith is a reasonable act and rationality is an essential part of it and not only external. Ours is faith in the Logos, therefore it cannot be against reason. We have the revealed faith, but we must logically express it according to the law of the Logos that comes from the same God who, precisely, is Logos. It is necessary to find arguments for our faith. The presentation of a moral law without reference to God, the autonomy of morality, we have seen it in history, for example with the French revolution or the Bolshevik revolution. But in these cases where human rights have been talked about, as happens today in many of the so-called liberal democracies, it has been done by talking about unlimited freedom and at the same time by making laws that prohibit the free opinion. A revealing paradox. For example, laws are being made today that impose you to say that homosexuality is not a reversible condition and those who do so are punished. In this, as in other examples, there are extremes for making a parallel between this liberalism and a form of “soft” totalitarianism that never existed before. All this also passes from an increasingly subtle form of control that passes in particular from the data present in digital communications. There is a clear ambivalence between extreme freedom and extreme control.

If God the creator, as we are saying, is the minimum reference to which we must return in order to save the livability of our societies, it seems to me that in the public and political debate there is a very little space for God. Which God is referred to?

Martino Cervo: Before being an issue of citation, the reference to God arises considering the nature of man, which inevitably consists of his opening to the mystery. This seems to me a secular fact: then it is clear that at the origin of Christianity there is a unique claim, that what we call God, this yearning to the meaning of life and things, has embodied in a man, in a precise point of the time and the space. This event has generated all that we know, particularly in Europe, and which Müller and Pera have authoritatively described. It strikes me that the censorship of the historical and cultural datum of Christianity in the public debate goes hand in hand with the censorship of this need for openness to the mystery proper of the human experience. With the result that, in the common mentality, seems to find space only a man with a singular dimension, the material one. But also this dimension suffers under the blows of a force whereby the apparent maximum of freedom coincides with a control and a standardization that have never had the tools they have today. 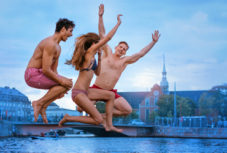