We publish the English version of an article from Il Timone 190.

“First of all I would like to thank the members of the anonymous cocainomaniacs, the anonymous alcoholics, the anonymous emotional addicted, the anonymous sexuals, the anonymous compulsive eaters”. Yes, the thanks that open the book ‘J’était incapable d’aimer’ (I was unable to love), published for the Artege editions in France, are a punch in the stomach, because in a few lines they give the idea of what the protagonist and author of these pages, Brigitte Bédard, has gone through. She adds immediately after: «Without you, I would never have known the Twelve Recovery Steps that led me, after ten years of intense encounters and the most terrible spiritual and emotional abyss, to truly and seriously put God at the center of my life. Thank you for loving me as I am!”.

Brigitte Bédard is a Canadian radio journalist, now a happy bride and mother of five children. In her book she puts down on paper what she had to go through to get to her current life. She was eleven years old when her life, up to that moment the ordinary life of a little girl, made her first turning point, with the first cigarette. It might seem like a small thing, but yet Brigitte tells that it was the first step towards drugs, first the so-called light drugs, when she was 12, then down to cocaine. A descent towards drug addiction accompanied by the chaos of relationships. She was only 13 when she had her first sexual experience, a real harassment, the beginning of an abyss. Scrolling through the pages there are names, circumstances, encounters, passions and lacerations, so many to leave stunned. At just 21 she already left a failed marriage behind her. Today, reached on the phone for an interview, she says: “We live in a society that mixes love and sexuality. I was looking for love, I was desperately looking for love, but I deluded myself into finding it through sexuality; when I gave myself, I thought that love would come and that in the end I would be loved. In reality I didn’t know anything about love. I was content, in a way, with the crumbs. When a person is hungry, thirsty for love and does not know God, he is sincerely led to think that another person will fill this void, this need for love, but it is not so. This is a form of ignorance. “ But yet Brigitte has lived long in this form of ignorance. She still writes: “At each date I said to myself:” What if he is the man of my life? ” And I was starting again. And in all this I used to define myself as a feminist».

She was so thirsty for love that, after desperately looking for a man, she started dating women. “All my friends, except maybe one or two, were lesbians and they told me that as a consequence, I was too” says Brigitte in her volume. “A nice day, without any warning and without any previous reflection or meditation, without hoping for anything, while I was at a bar table, a woman sat down next to me. I was crossed by a very powerful sexual drive, I had never felt such a desire in my life, not even for a man. That woman became a lover of mine. After her, there was another, and yet another, and then a series … “. Bédard continues: “I think at that time, after eight years as a lesbian, everyone agreed that I was. The journey had been long, arduous, but I had made it. So what did I need to realize it? What did I miss to definitively convince myself that I was a homosexual, that I had to “accept myself” and live as my friends and the therapist I went to every week said? My parents had nothing to say. Well, I said to myself, I don’t even need to come out. I had always feared it, because for me to reveal that to my family was like symbolically committing suicide. It meant stopping asking myself questions, it was like putting a definitive and irrevocable term to my examination of conscience, to my search for identity, to my existential questions”.

On one hand Brigitte seems to be sinking, on the other she accepts every outstretched hand, in an attempt not to get lost forever. She attends all the groups dedicated to getting out of the addictions in which she is trapped, based on the model of the 12 stages, born with the reality of the anonymous alcoholics. But at some point, despite the ups and downs, she collapses, to the point of feeling bad during one of the meetings she attended. At that point another member of the group approaches her and tells her that what she is missing are two fundamental stages of the journey, those which provided for an authentic and personal relationship with God. He proposes that she spend some time in a monastery and to go talk to a monk. The woman accepts, just out of desperation.

“I felt such a resentment towards the Church!”, she writes in the book. «God was a kind of energy for me. A little life, a little love, something between those two things, a thought of hope. But at the same time I was thinking of wars and cataclysms and I rediscovered myself an atheist, I said: “If God exists, he cannot allow this” ». But God, in his mysterious ways, was only waiting for her, at the Abbey of San Benedetto del Lago, in Quebec. In the silence of a few days spent in the monastery, Brigitte puts on black and white the story of her life and all the meetings, men and women, in which she had painfully sought love, questions about her identity, her wounds. The result is a forty-page writing with which she goes to speak to a monk in a sort of confession that lasts three days, morning and afternoon, morning and afternoon and then again morning and afternoon. Her passion.

Brigitte talks about her sexual experiences, tells them all, one after the other, the monk says nothing, stands on the other side of the table, in silence, and listens. Then she throws out her hatred for the Church, quotes the inquisition, accuses the monk of being conniving with evil in the Church, yells at him: he listens and keeps silent. “I felt like I was being listened for the first time in my life. In the intensity of that look, in that compassion, there was really the look of Jesus on me. He did not speak to me of Jesus not even once, but in him there was Jesus and I still did not know”, writes Brigitte. At the end of the three days of passion the monk only says: “Brigitte, if you knew the gift of God!”. From words to tears, from darkness to light, from distance to faith. Brigitte’s conversion was so painful but dazzling. As if suddenly all the pieces of the puzzle had come together and finally her desire for love had found the only true answer. “Christ freed me”, is in fact the subtitle of her book. The journey will still be long and arduous but, she writes: «For the first time in my life I was no longer confused. I was sure of one thing: God was Jesus, and he was alive ».

«Today, after thirteen years of marriage and a chaste engagement», Brigitte tells us, «I live sexuality in my flesh and soul as the sacramental gift that God, our Father, has given me to unite with my husband, not only in the flesh, but also in the supernatural dimension. Sexuality is given to live a communion. And it is only in time, in duration, in “forever” that trust and freedom can truly thrive between spouses”.

In addition to her work as a journalist, in addition to being a wife and mother, Brigitte, now fifty years old, testifies how God has worked in her life, how that transformed her. “What has touched me most are women, like me, who have lost themselves in the ideology of feminism and have understood on their skin that it leads to nothing. Women who now know that the Catholic Church is not perfect, but also that in their lives they had things to change. We all have to walk with Jesus, the only one who really heals the heart of injured women … if we let him do it.” 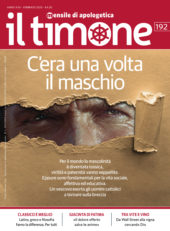